Well, first I'll say is "I'm alright". I've come out of this with a couple of bonechips/hairline fractures in my left little finger, a heap of bruising in my right leg (where I reshaped the front of the car), and lots of muscles that two days later are complaining about overstrain.

What happened? In essence, a learner driver turned right, failed to look for oncoming traffic, and ran straight into me. They did not look, they did not even try to stop, and they had NOT been displaying 'L' plates on their car, so there was no indication to me as a rider that they were not a fully licenced driver - which had I known I probably would have made some different decisions.

Approached a set of traffic lights that were red. There was a car in the lane in front of me already stopped at the lights, one in the lane beside me to turn right, and three cars in the oncoming traffic right-hand-turn lane waiting at the lights.

Before I came to a full halt, the lights turned green. The car in front of me went through the intersection, the car beside-but-still-infront also went through. Then the first of the three cars turning across my lane went through - which was safe, as there was still time for them to do so safely without impeding my progress (I was going straight through).

I reached the white lines, and the second car didn't look to be slowing, so I slowed further rather than accelerating normally. That second car should have stopped and given way - and didn't. I used my horn to say "hey, I'm here! I exist!" and slowed to a speed where I would pass behind them rather than drive into the side of them.

The third car turning right did exactly the same thing the second car had done - and it was then too late for me to do anything about it.

I remember realising "shit, this is going to hurt".

I remember the realisation that myself and the bike were being shoved along the road, and shifting position so that the bike was fully between the road and myself (I was laying face-down on top of the bike).

I remember finally coming to a halt, staggering up and walking to the passenger door - and the passenger staring at the front dashboard, completely ignoring me. They didn't look out, they didn't open a window; neither the driver or the passenger got out to render any assistance or see if I was alright.

Then there were a dozen witnesses around me, asking if I was alright - and I couldn't yet answer, as I still didn't know myself. They called the ambulance, helped me out of my gear, thought about taking photos on a phone camera, and took them with my digital camera which was in my backpack and has a far greater resolution so would show the details more clearly.

By the time the police arrived on the scene, both the car and the bike had been moved out of the way, but I've got the photos of where they ended up. The police took details at the time, but I've still got to go and make a statement on Tuesday evening regarding the accident.

I've not yet even met the driver that hit me. I've learned from the police that she was a learner driver - quite frankly she should not have been in Saturday morning shopping traffic, especially without 'L' plates on. I can only surmise that she froze when she hit me, since she made absolutely no attempt to stop for quite some time afterwards. And unfortunately, since she's unlicenced, she's probably also got no insurance, so I may well have a fight getting the repairs to my bike covered.

So here's the photos: 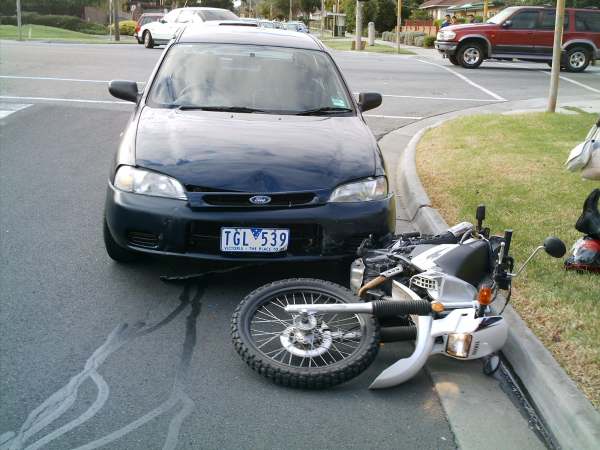 The final front view of where the car stopped. Just beneath the driver-side headlight is a line on the car where the car hit the front forks of my bike. The damage to the bonnet and front grill in the centre of the car is actually where my leg was - thank the goddess that I was wearing boots, as they reduced the severity from broken bones to simply severe bruising. Note also the position of the bike directly in front of the front passenger wheel - if the car had not been one of the modern cars with very small ground clearance, that wheel would have gone over both bike and me, and I'm not sure I would have survived at all. 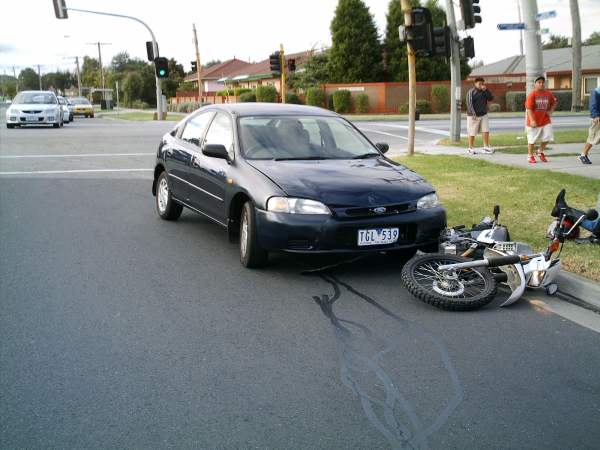 Another front view, but with some of the scrape marks in the road behind the car visible (only just in the web-shrunken view, but they are there). 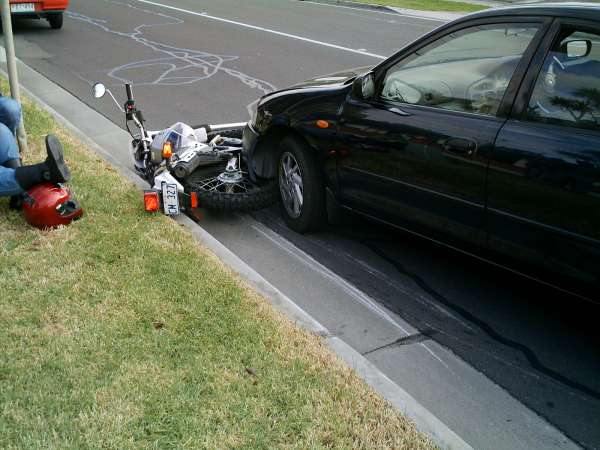 Side on view of the bike and the car.

From the rear - with the scrape marks of the bike along road and gutter visible. 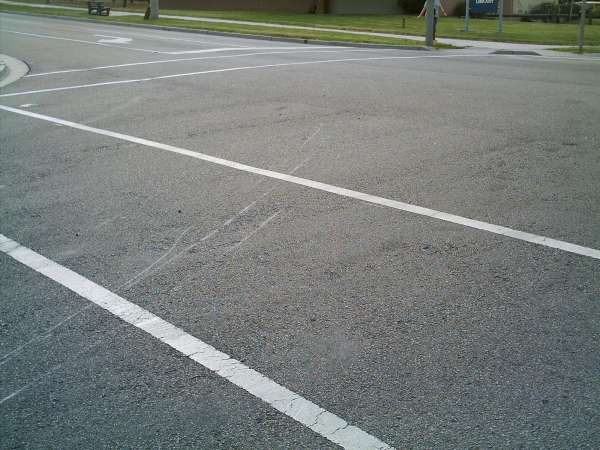 This one shows the gouges in the road surface from where the bike first hit the road. As can be seen, she's hit me when I was about 2/3 of the way through the intersection, absolutely dead on, and then continued driving right around the corner, pushing the bike along with her. I have no idea how I managed to NOT have my left leg trapped under the bike when it went over - sheer instinct took over and allowed me to fall on top of the bike, and kept a hold of it so that I did not end up under the car itself. 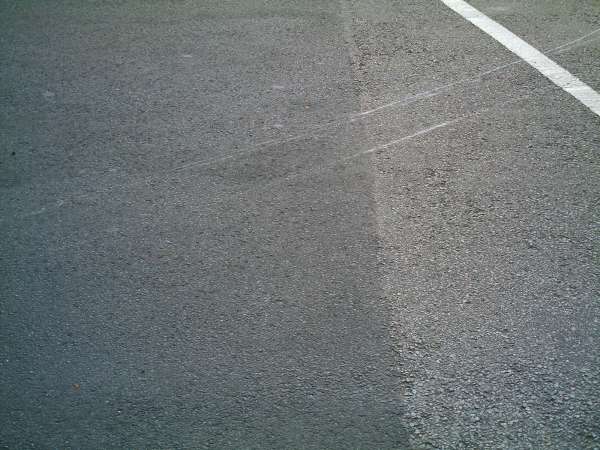 The scrapes across the white line.

And as for speed - it all occurred at walking pace! I was low enough in first gear that the bike was still in that horrid 'very grabby' part of the gears, and the car had started when the lights turned green. If she'd even paused to check for oncoming traffic, I would have been through fine. All in all, I've gotten out of this one extremely lightly considering what happened. But right now, I hurt :(